It turns out, potatoes are bad if you want to keep a Slim Jim figure. Deep inside the busy neurons in my brain, I’ve always known—good things typically harm you in some way….like a pair of succulent Christian Louboutin: bad for feet (have you seen those heels?) and worse for your wallet—but hell, they are delicious!

Rob Stein writes in the Washington Post that a study done at Harvard followed participants in intervals of four years and observed their diet and weight change over time.

Within each period, the subjects gained an average of 3.35 pounds. Every additional daily serving of potatoes pushed up the scale by more than a pound every four years. As expected, the type of potato, however, was important. Every order of french fries put on 3.35 pounds; a snack of potato chips added 1.69. But even each helping of boiled, baked or mashed potatoes contributed a little more than a half-pound.

Yikes. I consume a disproportionate amount of potatoes (as I am writing this, I am shamefully eating a mediocre cheesy potato soup)… chips, fries, broiled, baked, smashed, roasted, oven roasted, on the grill…you name it, I’ve tried it. But it doesn’t end here:

Many people might also be surprised that every extra serving of refined grains, such as white bread, added 0.39 pounds — almost as much as indulging in some sweets or desserts.

Ah! What am I going to do? My entire regimen is based on bread-y things. Have you ever gone to an Italian restaurant where they do not serve bread? Thought so. I love bread, I really do. I can eat a whole baguette in one sitting, by myself.

At last, the good news. Yogurt, it turns out, has actually helped people lose weight or keep it off. Sucks for me because I am slightly lactose intolerant, but never despair! Next on the “good” list is nuts. Those I actually adore, so from now on, I am going to snack on trail mixes, something I used to do and have, some for obscure reason, stopped doing cold turkey.

So, since I am known to occasionally dive into processed food heaven, I hereby challenge myself to diversify my intake of fruits and veggies and minimize that of potatoes. And bread, although the latter is a much bigger deal. 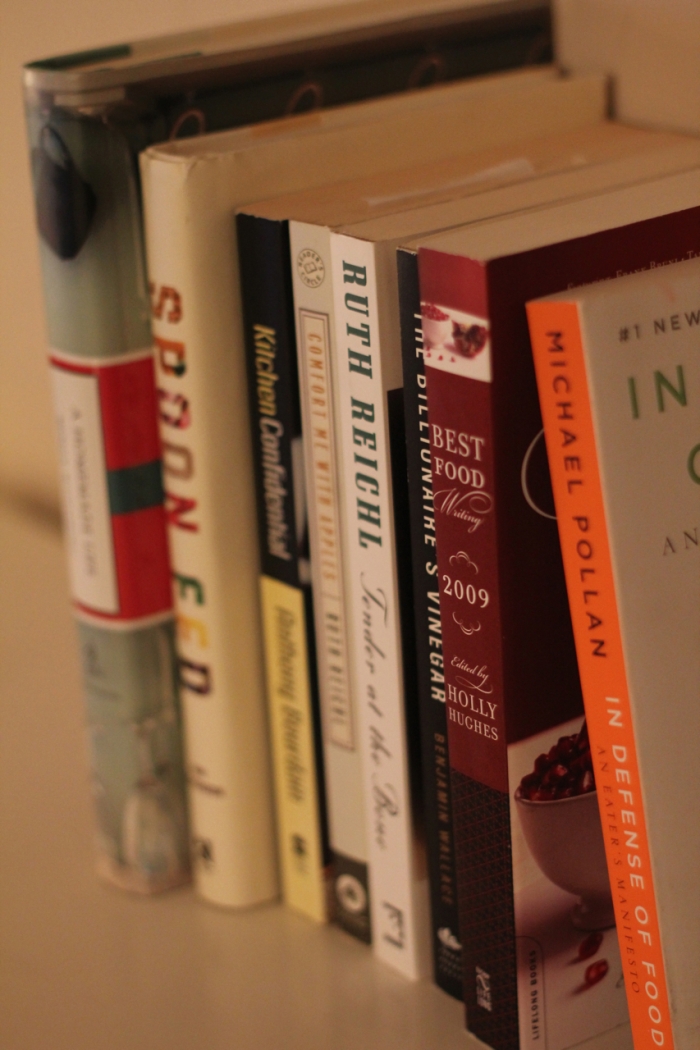 I have been in a food coma for some time—the food book kind of coma. I obsessively check the latest arrivals at the local used book stores (Daedalus and Read it Again Sam) for a possible addition to my wordy arsenal. I’ve got eight books waiting for me and one that I am currently thoroughly enjoying: Julie Powell’s Julie and Julia, My Year of Cooking Dangerously: An honest and raunchy account of life between Julia Child-derived meals. Right up my alley. Love it.

So, I’ve got some reading to do and in no particular order:

-Michael Pollan’s In Defense of Food

–Kitchen Confidential by Anthony Bourdain (who, by the way, will be in Charlottesville in October with none other than Eric Ripert)

–The Billionaire’s Vinegar by Benjamin Wallace

–A Homemade Life: Stories and Recipe from Kitchen Table by Molly Wizenberg (of Orangette, one of the best blogs around!)

Phew! That is is for now.Or maybe not. Any books I should add to this list?

Peter Chang’s China Grill (which has won over my taste buds not once, but twice) has finally made headlines, big, thick headlines in one of the most important cities for foodies: NYC. Grub Street of New York Magazine has named the local restaurant among “Food Treks Worth Taking This Summer.”

May I recommend the braised short ribs? Or the shallots bubble pancakes? You won’t be sorry. I promise.

After this accolade, the disappearing chef may just stick around for a while.